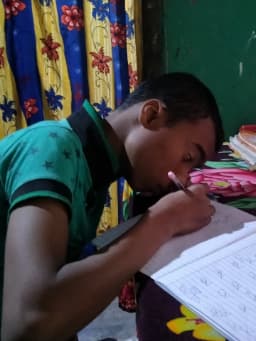 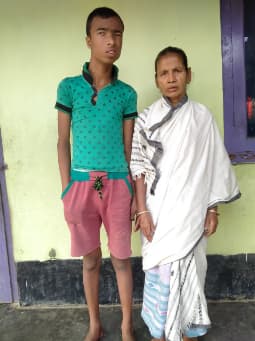 Making His Way Towards Independence

Meet Pappu Lahkar, he is 13 years old and has congenital deafblindness with severe hearing impairment & 25% of his vision left. He lives with his mother, sister and grandmother in a serenely small village in Assam. His mother is a daily wage labourer supporting the family after his father died when he was very young. Sense India with Sishu Sarothi met Pappu when he was 1 and a half years old. It was the day he was detected with deafblindness.

Pappu was not able to express himself properly. His pronunciation was not clear. He didn’t like to attend school due to the challenges faced in communication and felt hesitant to communicate with other children of his age. After joining our deafblind program, his speech improved, he learned to communicate better, pronunciation improved, and he can identify currency notes till Rs. 100.

He is learning to be independent. He works around the house, cleans his room and helps his mother in the kitchen. Pappu’s mother says, “I am so happy that my son gets services from you. Whenever we face any difficulty, we find your people. Now he has lots of changes in him. He can speak what he wants to say. I want him to become independent in his life.” His special educator believes that with regular training, he can become more independent. Pappu wants to be financially independent and open a shop in his home.

2021 All rights reserved with Sense India